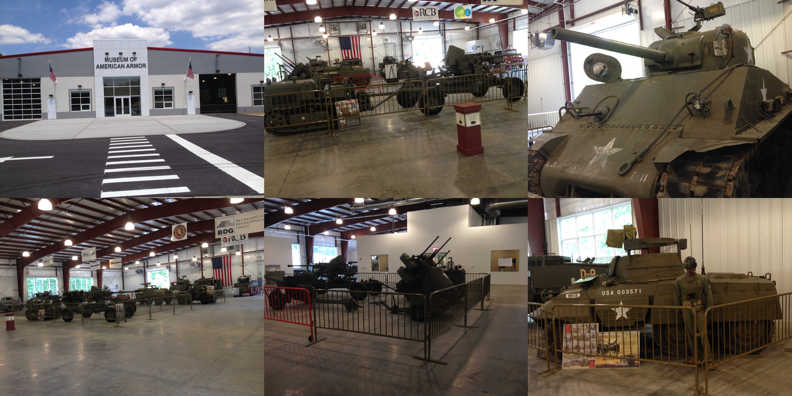 This is a post about heavy iron—but not the printing kind. There’s a striking new collection of World War II-vintage armored vehicles at the new Museum of American Armor in Old Bethpage, NY, on the grounds of the equally historic Old Bethpage Village restoration. Naturally, the armor museum will provide many a blissful afternoon for World War II tank and artillery buffs. But, it also has much to offer anyone else interested in learning more about the immense contributions of mechanized weapons systems and the men who operated them to the winning of the Good War.

The museum, which opened to the public two days ago on the 70th anniversary of D-Day, is the gift of Lawrence Kadish, a real estate investor who contributed more than $2 million to the construction of the building and the creation of the exhibits. Some of the work remains in progress under the supervision of museum director and exhibit curator Mark Renton, an expert in the restoration of historic armor. Renton says that eventually, more than 20 of the combat vehicles will be in full running condition for live displays.

Some of the pieces—the Sherman tank, for example, or the “Long Tom” field gun—will be familiar to students of the period. Many other, less well known machines add detail to the panorama of American industrial ingenuity and might that the museum stirringly celebrates. There’s also a gallery of war-themed art and, in a space that will be a VIP conference room, a life-sized replica of that icon of American armor, Gen. George S. Patton.

History in the form of war-winning fighting vehicles soon literally will be on the move at the Museum of American Armor. It has all the makings of a national treasure of its kind, and we’re indeed fortunate that it has made its home in the NY-metro region. 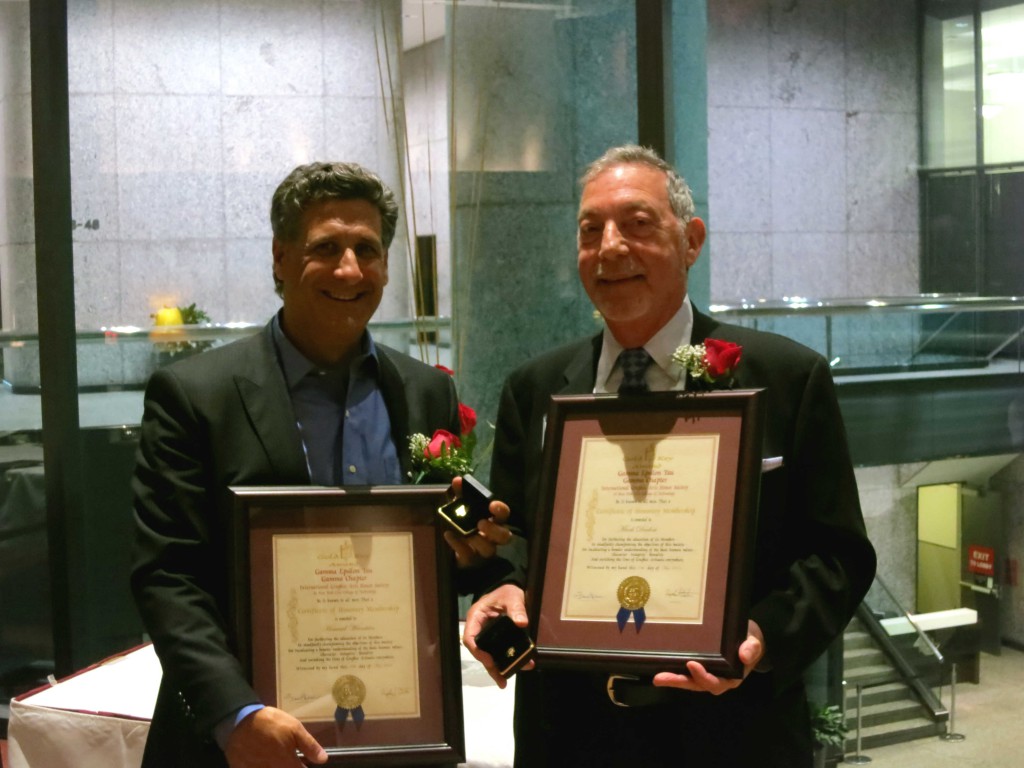 On May 30, Howard Weinstein (left) and Mark Darlow became the 2014 recipients of Gamma Gold Key Awards from Gamma Chapter, Gamma Epsilon Tau. A metro area tradition since 1956, the Gamma Gold Key Awards salute those who have made exceptional professional and personal contributions to the graphic arts industry. 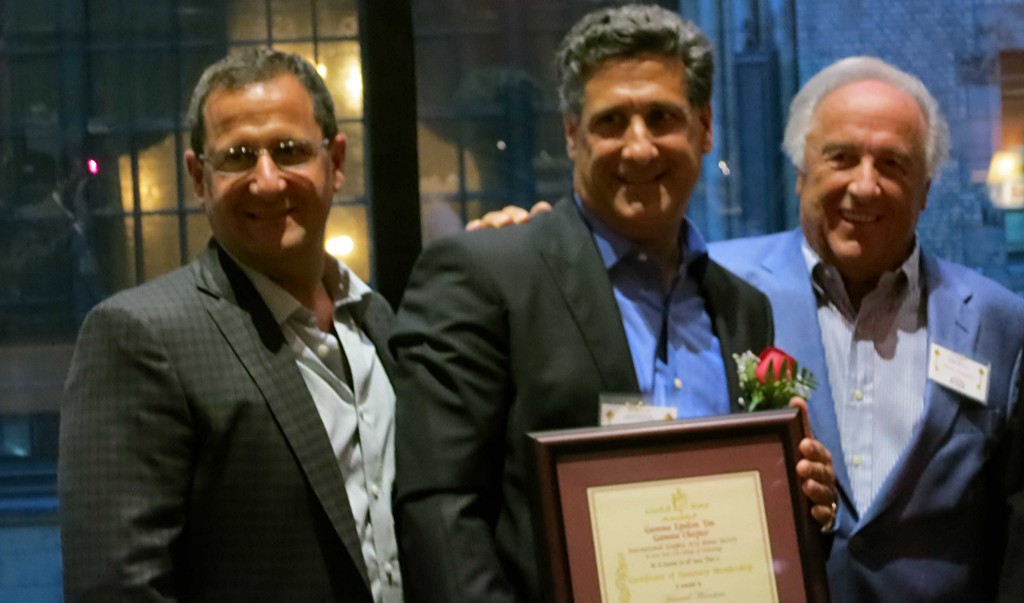 Howard Weinstein is congratulated by his brother, Scott (left), and his father, Murray, at the awards ceremony at the 101 Club in midtown Manhattan. The three are the founders and principals of Candid Litho, one of the metro area’s leading commercial printing firms. Howard’s advice to the students in attendance: “Know a little bit about lot of things. Be able to listen first, and then speak. Learn from the work ethic—nothing will come easy.” 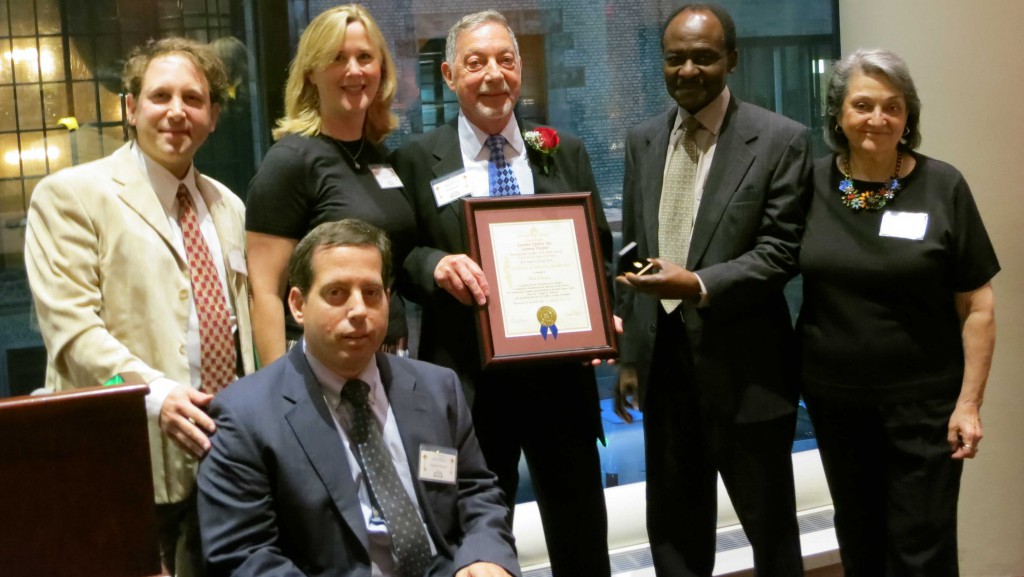 Members of the Darlow family share the auspicious occasion with Mark Darlow, recognized as a technical pioneer during the days of the industry’s transition to modern digital production methods. To his right in the photo are Prof. Frank Adae, Department of Advertising Design and Graphic Design (ADGA), New York City College of Technology (NYCCT), the award dinner’s organizer and emcee; and Annette Wolf Bensen, honored during the program for her many years of service as an ADGA instructor. Bensen was the recipient of a Founders Gold Medal & Citation Award fron Gamma Chapter in 2011. 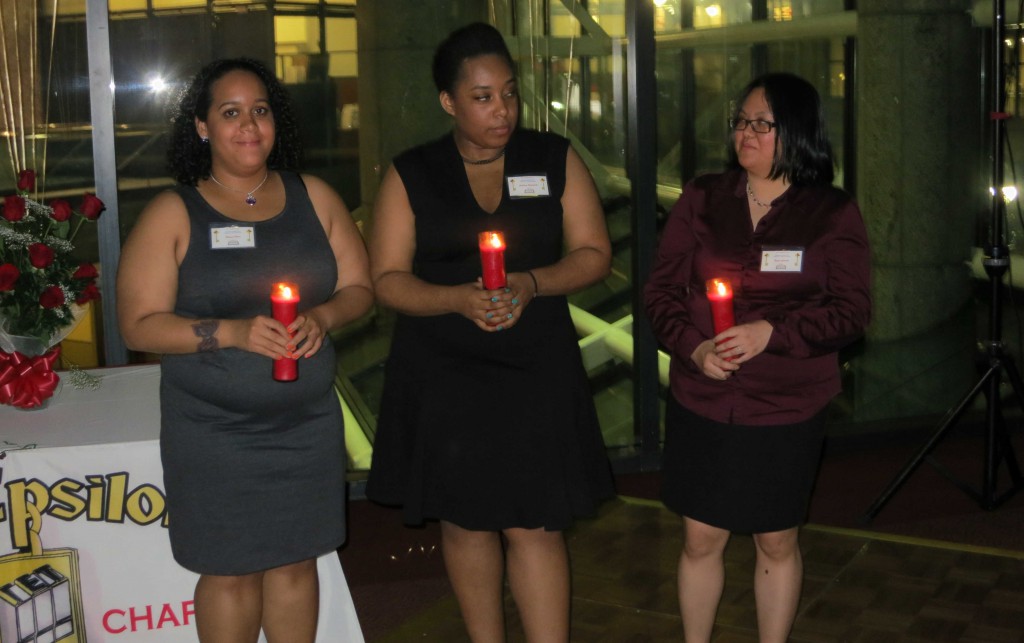 As part of the induction ceremony for Gamma Chapter, Gamma Epsilon Tau, ADGA students light candles to signify the light of reason cast with the aid graphic communications down through the centuries. Domiciled at NYCCT, Gamma Chapter is part of a national fraternity for students of graphic production and design. ADGA is the largest academic organization in the metro area for graphic studies.

The simplest answer: the desire to fill a void. For too long, the print and graphic communications industry in the tristate area of New York, New Jersey, and Connecticut has been without a news medium exclusively its own—a resource focused on what’s happening to the industry in this region, and on who’s making it happen.

Without this kind of dedicated coverage, it’s easy to lose the local feel—the special essence of the places where metro area graphics professionals develop the creative, plan the campaigns, feed the media channels, and get the jobs done. This blog will be your guide to the news from the streets, suites, and the production sites of what is still one of the most vibrant, progressive and, well, interesting graphic communications markets anywhere in the country.

Everything that contributes to sustaining that interest will be welcomed editorially at Metro Graphics Reporter. We’re independent, inquisitive, and eager to tell the tristate story as it has always deserved to be told.

The most important editorial resource for Metro Graphics Reporter is you. Keep us posted. We promise to return the favor. 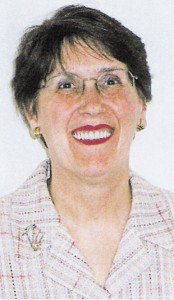 For nearly two decades, Keenan has been one of the most influential figures in printing industry affairs in the New York – New Jersey metropolitan area. She currently serves as vice president of Printing Industries Alliance and manager of its NY/NJ metro office in Westfield, NJ.  Headquartered in Amherst, NY,  Printing Industries Alliance is a regional trade association representing the $20 billion graphic communications industry in New York State, northern New Jersey and northwestern Pennsylvania.

Keenan, who joined the organization in December 2006, formerly held a number of executive positions with the Association of Graphic Communications (AGC), a metro area trade group. She was with AGC for 13 years and served for a time as its president. At Printing Industries Alliance, she is responsible for directing advocacy efforts in both public and media relations and in federal, state, and local government affairs programs. She also is the primary coordinator of the association’s annual Franklin Event.

Keenan has more than 35 years of advocacy experience in corporate and association management. She relocated to her native New Jersey from Washington, D.C. where she served in lobbying and senior positions at Bechtel Corp., American Consulting Engineers Council, and National Newspaper Association. She was honored by the U.S. Environmental Protection Agency for her participation in its “Common Sense Initiative” and was awarded the Hammer Award for Public Service by former U.S. Vice President Al Gore.

D’Onofrio is vice president of commercial sales at DG3, a global print and communications business. The position, which he has held since his company, Mirror Graphics, Inc. was acquired in 1999, includes sales, estimating, production, and billing for the major accounts he serves.

Gamma Epsilon Tau is a national, coeducational, collegiate printing fraternity in which students of printing and publishing can meet and interact in a professional and social atmosphere. Its members are enrolled in graphic arts programs at many colleges, technical institutions, and universities.