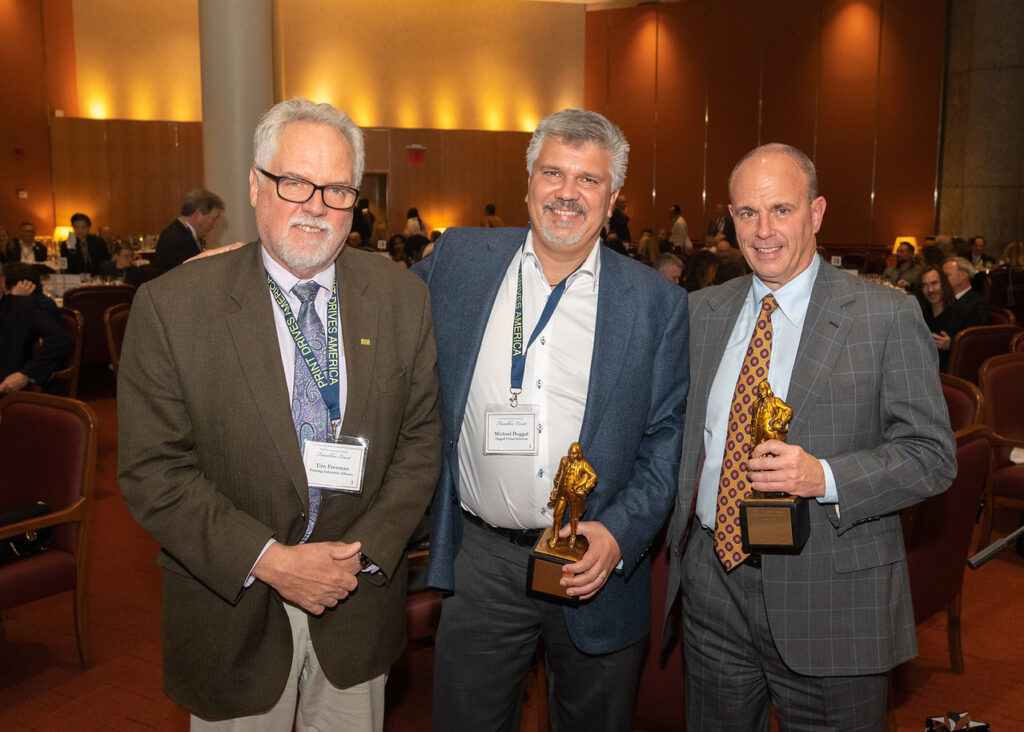 Picture the scene: a crowded but convivial cocktail reception. An elegant, jazz-accompanied sit-down dinner in a posh private club. Honors proudly paid and sincerely accepted. Networking in an intimate after-party at the bar to top it all off.

Affairs mixing business and pleasure like this used to be something to look forward to in the printing industry until COVID-19 cut them short. But, the tradition came back to life on November 17 with the return of the Print Drives America Foundation Franklin Event, a live, in-person celebration of industry service, leadership, solidarity, and the enduring power of the medium that continues to inspire them.

Hosted by the Print Drives America Foundation and Printing Industries Alliance, the 68th edition of the Franklin Event drew 180 people – all showing proof of vaccination – to the 101 Club in midtown Manhattan. The centerpiece of the evening was the presentation of the Franklin Award for Distinguished Service to Thomas J. Quinlan III, the 2020 honoree; and Michael Duggal, selected to receive it in 2021.

Quinlan, the retired Chairman and CEO of LSC Communications, held some of the industry’s highest-level executive posts throughout his 26-year career in printing. Duggal, CEO of Duggal Visual Solutions, is renowned for turning an analog prepress business into one of the nation’s most fully equipped providers of visual imaging services.

Their Franklin Awards are the latest in a series of tributes that began in 1952 as the printing industry’s salute to iconic personalities on the national stage. In keeping with that idea, recipients have included former U.S. presidents, military leaders, industrialists, and other celebrities.

In recent years, however, the honor has refocused on leadership and service within the industry itself, hailing members who have compiled exceptional track records in business as well as in support of worthy causes. The 2020 and 2021 recipients are exemplars of both.

Among Quinlan’s many good deeds on behalf of others was paying full tuition for students in Staten Island, his home borough, who had lost parents in the 9/11 attacks. Quinlan also raised $100,000 for the graphic communications scholarship program at New York University, which recognized him with its Prism Award in 2011.

In his acceptance remarks, Quinlan admitted that he barely knew what a printing press was on the day that the legendary Robert G. Burton, Sr., hired him away from the financial industry to become the assistant treasurer of World Color Press. From there, the arc of his career took him to the pinnacle of leadership in the commercial printing segment, culminating in his 2007 appointment to president and CEO of R.R. Donnelley & Sons Company, then the industry’s largest commercial printing firm.

‘Some Kid from Staten Island’

“Whoever thought that some kid from Staten Island would be in charge of R.R. Donnelley?” Quinlan mused. Looking at the bigger picture, he said that the continuing strength of the print medium lies in the fact that “this industry has to innovate every day” as it has done since Gutenberg’s time. Quinlan also predicted a rebound for print as digital and social media, mired in controversy and facing regulatory pressure, start to lose some of their hold on audiences.

“You can’t talk about grit without talking about Michael Duggal,” declared Glen Rabbach of Duggal Visual Solutions. “Mike believes in vision, and he believes in process.”

The honoree displayed both virtues when he made an extraordinary change to the company’s production operations early in 2020, during the worst of the COVID-19 pandemic in New York City. Rabbach related how, on just a few days’ notice, Duggal pivoted the business almost entirely to manufacturing personal protective equipment (PPE) for front-line responders. Duggal Visual Solutions eventually would deliver more than 3 million pieces of PPE, saving lives and helping to preserve its own existence as a business as well.

“Mike has led us back to the light at great sacrifice,” Rabbach told the audience.

Today the honoree presides over a technology-rich operation that has expanded beyond its base in New York City to additional sites in Portland, Ore., and Burbank, Calif. Under his stewardship, the company has come a very long way from the film processing business that his father, Baldev Duggal, started in 1961 and that he took over as CEO in 2002.

Accepting his Franklin Award, Duggal identified quality and creativity as the main motivations for him and his staff, whom he thanked for helping him to make the company what it is. “I’ve been blessed by the loyalty of amazing people,” he said. “I’ve been blessed to see what people can do when they work together.”

‘Let’s Value What We Do’

Duggal also offered encouragement to the industry as a whole. Instead of obsessing about the numbers, he urged, “let’s value what we do. We’ve been dominated by larger suppliers and larger customers, and we’ve fallen victim to price.” He reminded the audience that print is a force for good in every community across the country. When he asked those in the room to stand up if they had ever donated printing to schools, churches, or other local organizations, many rose to their feet with him.

Spreading the word about print’s pervasive influence is the mission of the Print Drives America Foundation, a 501(c)(3) initiative aimed at burnishing the medium’s reputation and increasing its market share. Under the direction of Martin J. Maloney, the foundation operates a multi-pronged national marketing and public relations campaign to raise awareness of print among media-buying decision makers.

The success of the effort, said Maloney, is reflected in the fact that more than half of the 10 print segments promoted by the foundation “have gone through the roof” in terms of growth. He added that together, the segments dwarf all other media in volume by half, including internet and broadcast.

“Print is colossal, print is high-tech, print is green, and print is cool,” Maloney declared. “Print is firmly back in the driver’s seat.”

By the same token, the Franklin Event is firmly back on the industry’s social calendar. The date for 2022 will be announced by Printing Industries Alliance, the trade association representing the graphic communications industry throughout all of New York State, the northern half of New Jersey, and northwestern Pennsylvania.

“The level of buzz we heard during this year’s event tells us that we made the right decision,” said Tim Freeman, president of Printing Industries Alliance.