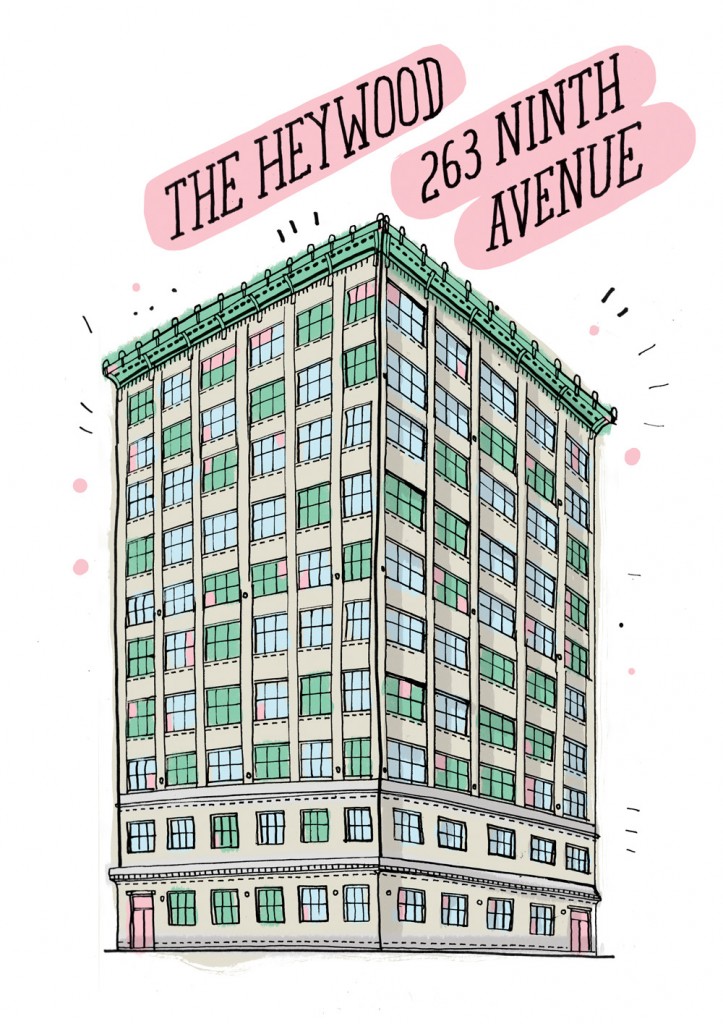 James Gulliver Hancock is an Australian artist who came to New York City and promptly fell in love with the diversity and visual richness of its architecture. He’s made it his life’s work to illustrate every metro building he’s set eyes on, and the results can be enjoyed in his just-released book, All the Buildings in New York: That I’ve Drawn So Far.

I became aware of it at Brain Pickings, an online compendium of “interestingness” curated by the journalist Maria Popova. She chose a number of Hancock’s illustrations to decorate the post, and one of them, the depiction of “The Heywood” at 263 Ninth Avenue, looked familiar the instant I glanced at it.

A little Googling helped me to recall it as the former home of a firm that many other members of the graphics industry in the metro area also will remember well: Tanagraphics, later TanaSeybert, a company I visited many times on editorial assignments as well as on field trips for my classes at NYU.

Ideally situated to serve the metro market from its multi-story location on Ninth Avenue between 25th and 26th Streets, Tanagraphics was for many years one of the region’s foremost providers of graphic reproduction services. Its 2004 merger with the Seybert Nicholas Printing Group formed what was then said to be the largest privately held print management company in New York City.

The following year, TanaSeybert decided to consolidate operations at a 140,000-sq.-ft. plant it purchased at 525 West 52nd Street. Alas, the new home was not destined to be a permanent one, as the decline of the metro print market and other factors forced TanaSeybert into Chapter 11 in 2009. Shortly afterwards, the company was acquired by Unimac Graphics and relocated to Unimac’s facility in Carlstadt, NJ.

After Tanagraphics moved out of 263 Ninth Avenue, the building underwent the same transformation that has deprived New York City of so much else of its former manufacturing space: conversion to residential condominiums.

The Heywood now comprises 50 high-end loft residences with 12.5′ ceilings, 8′ windows, and views to die for. Christine Quinn, City Council president and mayoral candidate, lives at The Heywood with her partner. Living spaces in what used to be Tanagraphics production areas sell for seven figures—more money than many small graphics firms in the metro area see as revenue in a year.

Do the current residents of The Heywood hear the ghostly rumble of long-silenced offset presses while inhaling phantom vapors of litho ink and hot-melt glue? For their sake, we hope not. But for those of us who pass by 263 Ninth Avenue with memories of what the building used to house, the associations with print will always be there. Our thanks to Mr. Hancock for reawakening them.