In the Bronx, an all-volunteer organization demonstrates why print remains foremost among the media as a force for social good. 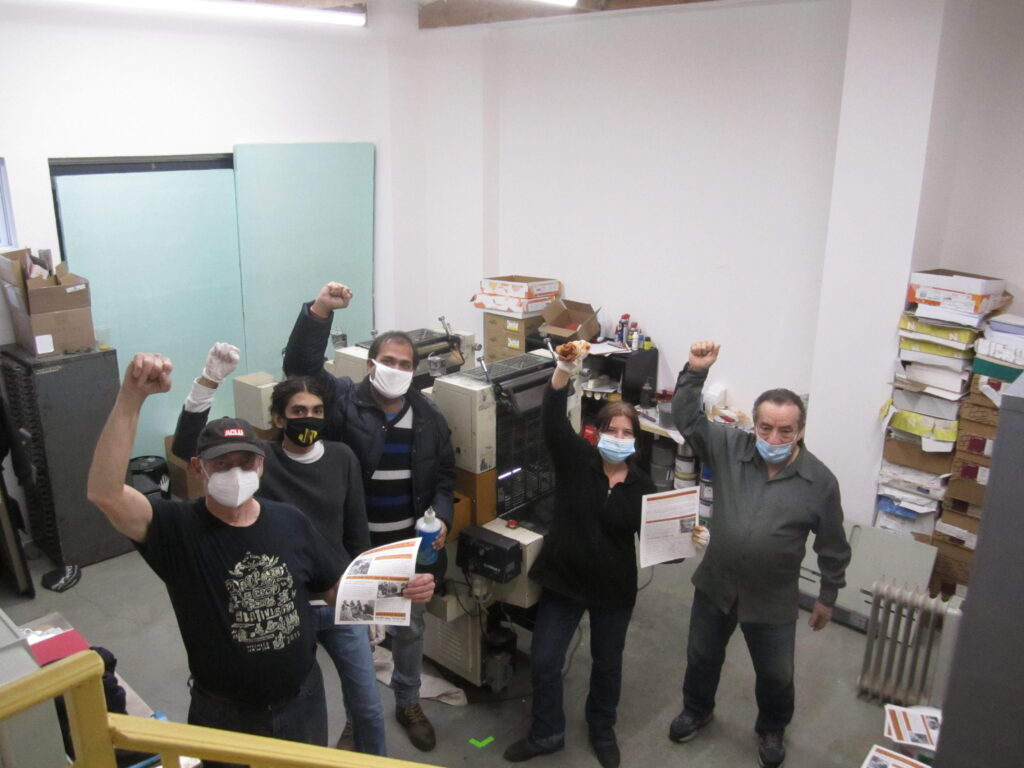 Printers tend to think about printing in a mercantile way, and there is nothing wrong with that. Print is what they manufacture and sell to sustain their businesses. If they are commercial printers, the bulk of their output will be used to promote and advertise profit-making businesses of all kinds.

But print is also humanity’s first mass medium for speaking truth to power, exposing injustice, and driving social change. A New York City-based organization called Women’s Press Collective (WPC) is upholding print in that historic role by putting it into the hands of people who don’t do it for a living, but who have embraced it as a means of making their lives and those of other people better.

WPC recently received a cash grant from the Graphic Communications Scholarship Foundation (GCSF) in recognition of the training it offers to those who want to learn how to print in support of the causes they advocate. This is no small distinction for the group, which is staffed entirely by unpaid volunteers working with donated equipment and supplies.

In fact, WPC’s pressroom in the Kingsbridge section of the Bronx may be the only remaining place in the New York City metro area where people who don’t work for printing companies can go to learn what an offset lithographic press is and how to operate one.

WPC’s other principal activity is making printing available to those who have worthy causes to advance, but who lack access to mainstream media – a mission that goes to the heart of WPC’s quest for social and economic justice.

“That’s what we mean by printed materials,” explains Lisa Daniell, WPC’s Operations Manager. “Not just to raise consciousness about issues, but as organizing tools to help pull people together and begin to build solutions that come from the community working together.”

Print helps people succeed at this in ways that corporately owned electronic and digital media don’t, according to Daniell. “We advocate for print because it’s independent. Another reason is that print encourages face-to-face organizing, where people meet each other in real life (and) have the chance to talk, to debate, to determine together how we can work together to address issues.”

These are issues of fairness, representation, community well-being, and other grassroots concerns that gather strength when printed material draws people together on their behalf.

Examples include a petition to shield public housing in New York City from intrusion by private developers. A brochure to encourage neighborhood organizing by members of the Garífuna, a Central American ethnic group living in the Bronx. A “shopper’s guide” of local businesses trying to survive in a rust-belt region of Western Massachusetts. Each was produced by the group or the individual behind it under the tutelage of WPC volunteers.

“Those projects come to us through our doing extensive community outreach in neighborhoods all over New York City” and elsewhere, Daniell says. The training, which includes presswork, graphic design, and writing for publication, is free of charge, courtesy of experts in the fields who donate their services as instructors.

With the disappearance of academic programs, union training facilities, and commercial trade schools for print production, WPC is, as far as it knows, the metro area’s only provider of hands-on learning in the subject for nonprofessionals. It follows a train-the-trainer model that expects learners not just to acquire these skills personally, but to share them with others as well.

“We are training people in rudimentary, basic press operation, and in some cases it’s their first time learning,” Daniell says. “We break down the specific skills of operating the press into a list of about 40 specific tasks that a press operator must know how to do. As soon as a trainee learns how to do a specific skill, then their job is to teach another trainee. This solidifies their knowledge, because they then have to explain it and demonstrate it and help someone else learn how.”

The method prepares people to handle presswork on their own in two to three months, according to Daniell. It is a two-stage learning curve. Trainees who have mastered the list of skills for themselves are deemed “certifiable” as press operators. Those who have helped others reach the same level of proficiency are considered fully certified.

Structuring the training in this way “makes us a stronger organization because it creates a process where there’s the ability to have continuous, independent community press operation,” Daniell observes.

Training and production take place in a shop that always strives to make the best use of the modest resources it has. Currently, its sole printing machine is a small-format, two-color Ryobi 3202 offset press supplemented by a POLAR 55 paper cutter and an assortment of tabletop bindery equipment. A flip-top plate exposure unit supports the shop’s film-based prepress workflow.

The film negatives for platemaking are donated, as is almost everything else that the WPC pressroom uses.

A recent issue of Collective Endeavor, the group’s quarterly magazine, thanks a list of benefactors who include Garry and Eli Koppel of Positive Print Litho Offset, principals of the Varick Street trade shop that contributed the Ryobi 3202 (along with a plate punch and 80 cans of ink). Jay Passarella donated the POLAR cutter and other postpress equipment from In-House Graphics, his shop in Queens.

Industry generosity also helps WPC maintain an inventory of printing stocks even as the paper market continues to be plagued by supply-chain shortages.

“Most of the paper that we use is donated,” Daniell says. “In some cases, it’s donated by shops that have paper left over from a job. Larger shops buy a lot of paper to cover their jobs from regular clients, and then there may be something left over. So, they make that available to us.” The donor of three skids of paper graciously cut the sheets down to the 11″ x 17″ size needed for the Ryobi 3202.

The cash grant that WPC received from GCSF in June of this year is “already used,” according to Daniell, who notes that it helped to fund the purchase of pressroom furnishings such as industrial-quality paper shelving, a rollable work table, a safety cabinet for chemicals, and anti-fatigue mats for the floor. “We deeply appreciate it, and the pressroom looks great,” she says.

WPC’s belief in print as a lever for social justice and human rights goes back to its founding in 1982 by a group of women with backgrounds as labor organizers. Daniell says that some of the founders learnedprinting in order to produce the flyers and other materials they needed to generate support for the organizing efforts of some of the area’s lowest-paid workers: farm hands, domestics, and home care providers.

Originally from Palo Alto, Calif., Daniell joined WPC as a full-time volunteer in 1994 after stints in New York City’s finance and publishing industries. She says that at the time, “I had essentially no exposure to actual press production.” What she did have was a keen sense of society’s pervasive injustices and inequities – and an equally clear understanding of print’s hallowed role in combating them.

“Printing has a long history in movements in the United States that needed an independent voice,” she says, citing the American Revolution, the fight to end slavery, and the rise of labor unions as examples of watershed events that rallied people to their sides with the help of printing.

“Print has always been a means to get these stories out,” Daniell says. It is a tradition that WPC works to perpetuate. “Look at our place here. We have the machines, we have people with the skills, we have the paper, we have the ink. That means we can print.”

But, Daniell emphasizes that it isn’t merely for the sake of putting ink on paper. “We need a way where we can meet face to face with each other, to have the difficult conversations, and determine how we can work together. At WPC, we teach a method of organizing that utilizes the production and distribution of printed materials for that purpose as well.”

She counsels that teaching people to print for themselves serves these objectives better than seeking attention from the mainstream media, which have a track record of either ignoring grassroots issues or misreporting them. She also expresses reservations about social media as tools for positive change, despite their ubiquity.

“We’re not trying to say it’s not something people should use, but it is important to realize that its technological infrastructure is owned and controlled by some of the very wealthiest and most powerful corporations in the world,” Daniell observes. “We can put things up there, but we don’t control the algorithms as to what gets amplified or not.”

The Only Way to Do It

These sentiments ring true to community organizers who have turned to WPC for help in spreading the word. One of them is Cesar Yoc, a co-founder of Save Section 9, a movement aimed at blocking a plan to turn over the management and repairs of New York City Housing Authority (NYCHA) properties to commercial developers. Save Section 9 asserts that the plan, know as Blueprint for Change (BFC), could lead to the privatization and sale of the city’s already dwindling stock of public housing units.

Yoc, who lives in NYCHA housing, wanted to alert fellow tenants to the threat posed by BFC and enlist their support in opposing the plan. For this, he says, digital media wouldn’t suffice. Many NYCHA residents didn’t have “smart” devices, and for those who did, “Zoom was a little impersonal” as a means of bringing them together.

“The only way that could be done was through printing,” Yoc says. He obtained it in the form of 1,000 petitions that he printed for Save Section 9 after joining WPC. Now he could “go out and knock on doors” and use the printed piece as a starting point for urgent discussions about the implications of Blueprint for Change. Distributing the petitions at “family day” events in NYCHA housing developments gained further recognition for Save Section 9.

Daniell sees Yoc’s story and others like it as emblematic of what the Women’s Press Collective exists to do.

“We’ve provided publication support for scores of community based organizations in New York City that are really on the front lines of economic, social, and justice issues like comprehensive healthcare, climate justice, and access to legal recourse,” she says. “WPC is a place where community organizations can produce their own media, get their own stories out, and produce printed materials to reach people in the community affected by these issues.”

The group’s growing number of projects along these lines keeps it fully committed to its mission. What WPC needs now, according to Daniell, is a redoubling of the support that has enabled it to become the force for good it aspires to be.

WPC also would like to augment its pressroom with a computer-to-plate unit and a small-format digital press. Those with expertise, equipment, or other resources to offer may contact the Women’s Press Collective at 718-543-5100 or by e-mail at womenspresscollective@yahoo.com.

Daniell credits her own development in printing to the guidance and encouragement she has received from people in the industry over the years.

“I really feel privileged to have met so many graphic arts professionals who have taught me about printing and taught me about the industry. The graphics arts industry has people in it who are just so generous with their knowledge.”