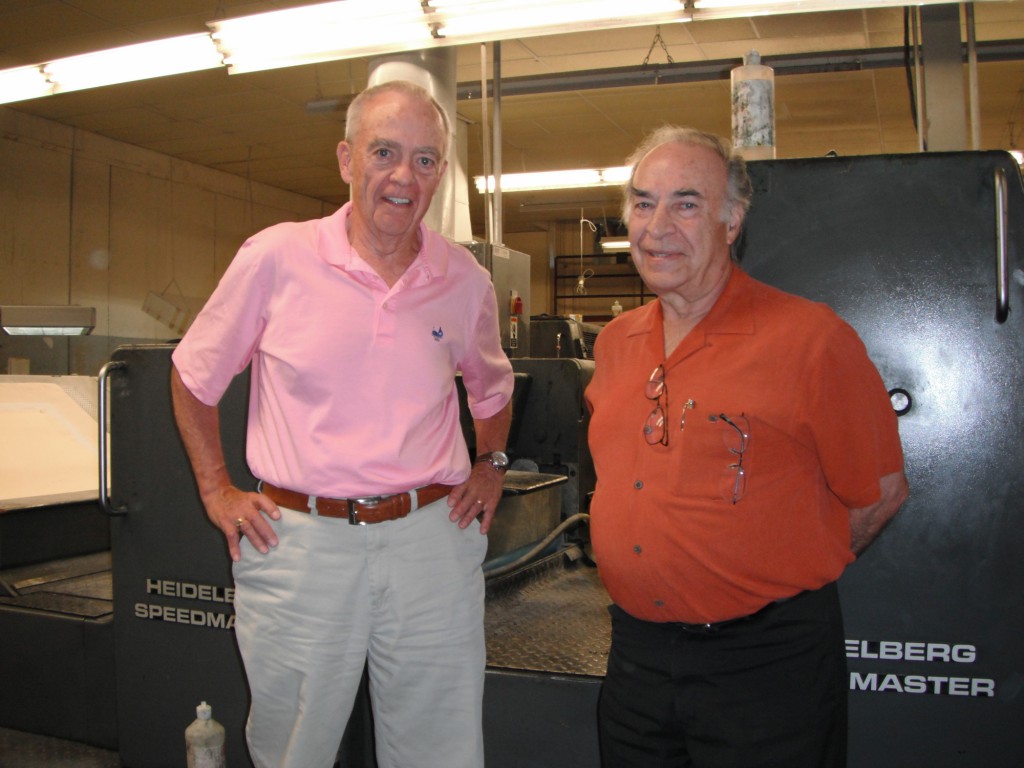 Imagine everything in ruins.

Not some of it. All of it: production equipment. Paper. Press bays and workspaces. Lights and HVAC. Telephones and computers. Jobs in progress. Literally every material item housed within a printing plant either damaged beyond repair or knocked completely out of commission.

Now, try to imagine surveying this overwhelming devastation and vowing—without knowing how or even if the vow can be fulfilled—to re-emerge from the dead zone into which a vast wall of black water has brutally shoved your printing business.

The Wall Street Group of Jersey City, NJ, recently reported exactly this kind of phoenix-like rise—not from ashes, but from the waterlogged detritus that its plant and equipment had been turned into by superstorm Sandy on October 29, 2012.  Metro Graphics Reporter visited the company this week to hear first-hand what one of the owners described as “more a story of survival than of disaster.”

Outwardly, there’s nothing to indicate that the printing building at 1 Edward Hart Drive had been lying squarely in the path of one of the worst natural disasters to strike the NY-NJ metro region in a generation. Inside, fresh slabs of sheetrock and the smell of new paint speak of a cleanup—but not of the gigantic task confronting partners Alfred J. Basile and Philip J. McGee as they began to comprehend the full extent of the harm that the killer storm had done.

What they did when they were able to regain access to the darkened, still partially flooded plant a few days later was simply to tackle whatever was in front of them.

The owners and their 30 employees immediately pitched into the bailing, hauling, salvaging, and scraping with no more guidance than the knowledge that these things desperately needed to be done. Moving just as quickly, Basile and McGee brokered out whatever work was ready for production or had to be rerun. Having satisfied themselves that obligations to customers wouldn’t be compromised, they then turned the somber job of inventorying damaged equipment and determining what could be saved and what would have to be replaced.

Basile and McGee aren’t the only printers in the metro area to have taken a body blow from Sandy, but we don’t know of any others who have faced up to a greater loss with more resilience and perseverance. Those virtues are the products of a decades-long partnership between two print professionals who epitomize all the qualities of endurance associated with the printing industry in this region. 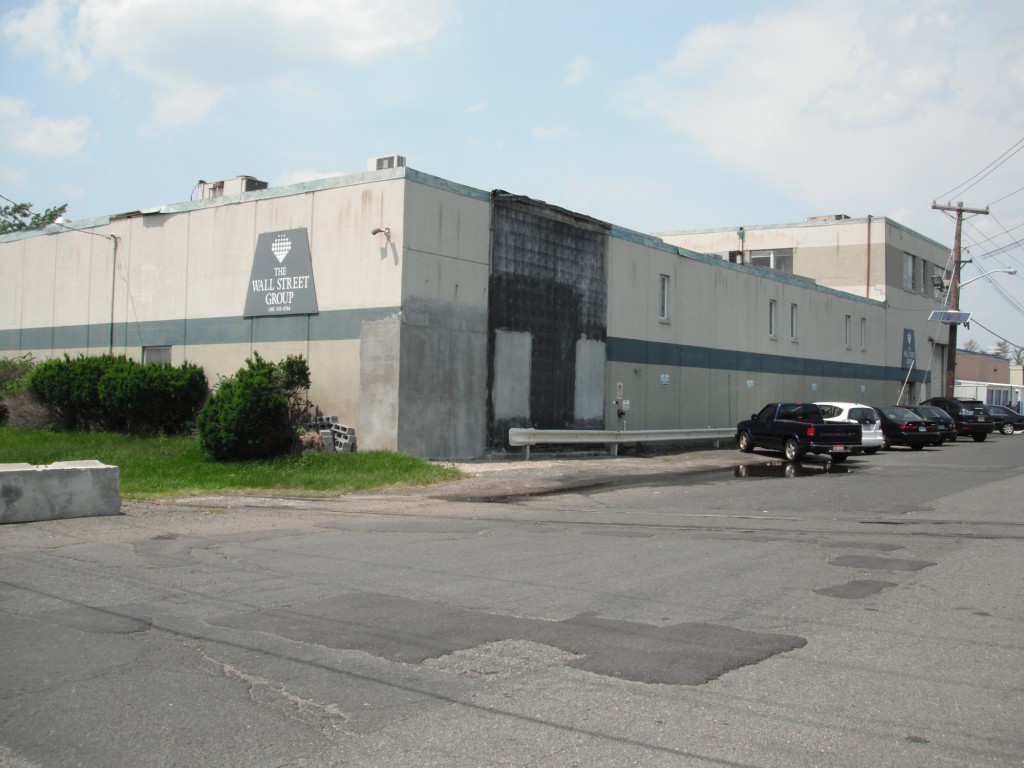 On October 29, 2012, water surging from superstorm Sandy breached the plant’s front doors and destroyed or damaged nearly everything inside the building.

The story of The Wall Street Group begins with the small Multilith shop that Basile started at 27 Whitehall Street  in Lower Manhattan in 1966. About four years later, he moved the business to 11 Broadway where McGee, a former print buyer for Western Electric and sales manager for Xerox, was working for another printing firm. Joining forces, the two men went on to acquire a Mountainside, NJ, printing company that had offset presses larger than the small-format Multis they were running.

They moved the Broadway and Mountainside operations to Harborside, NJ, in 1981. Five years later, everything was consolidated in the Jersey City plant near Liberty State Park that The Wall Street Group now occupies. After refurbishing the building—a former metalworking plant—the partners installed 40” presses, a full bindery, and, eventually, digital presses and mailing equipment.

As the name suggests, printing for investment houses and financial institutions has been the traditional mainstay of the company since the days when Basile began producing buy-sell pads for stock market traders. Because documents such as research reports for equity firms have shifted from printed form to electronic distribution, some of this traditional volume has declined. The partners make up the difference with work for medical, educational, and not-for-profit customers and, as McGee says, for “anyone else who wants ink put on paper.”

Now that the company is just a few years shy of the 50th anniversary of the founding of the seminal business on Whitehall Street, the partners are clear about what has been most responsible for carrying them toward the golden milestone: their absolute commitment to customer service and to meeting what others might regard as impossible deadlines.

“We try not to have one-shot customers,” says McGee of his and Basile’s belief in making all customer relationships last. This they accomplish primarily by refusing to say no. They refrained from saying it, for example, in the case of the customer who one afternoon sent in an order for 50 Wire-O bound booklets with UV-coated covers that had to be in someone’s hands in Boston the next morning.

Thanks to vertically integrated production assets that included digital presses for the inside pages, an offline UV coater for the cover, and a Wire-O machine for the binding, The Wall Street Group was able to turn around in hours what might have taken another printer days.

“Nobody wants to wait for anything today,” says McGee, adding that being equipped for same-day production gives The Wall Street Group a significant edge over rivals lacking the capabilities it has. Another key to longevity, he says, is the fact that the company doesn’t do and thus has never had to depend on low-end commodity work.

It also pledges to optimize for printing everything its customers send it, correcting errors and doing whatever else it takes to make the job run problem-free. This is a habit developed in the old days, says McGee, when “customers used to give us a bag of paragraphs” and expect the hodgepodge to be turned into crisp, coherent documents.

The plant typically operates on two shifts, five days a week. Nowadays its output is about half digital print and half conventional offset. Such was the state of affairs last October 29, when Basile, McGee, and their staff battened down the plant for the bad weather they knew was on the way.

But, like nearly everyone else in the storm’s path, they had no idea of how bad it would turn out to be. Basile and McGee sandbagged the loading dock doors, double-skidded the paper in the storage area behind them, sent everyone home, and hoped to avoid the worst.

That night, storm surge in Upper New York Bay reportedly lifted the sea level high enough to obscure the pedestal of the Statue of Liberty. Some of it swelled into the inlet facing Edward Hart Drive, leaping over the low pier of the marina there and pouring straight up the street toward the plant, only a few hundred yards from the water’s edge.

The misplaced curtain of water struck the building with so much force that it literally tore the massive loading dock doors from their frames. Their wreckage, along with tons of spoiled paper, lay strewn across the parking lot outside. Within the plant, a flight of stairs leads from the mezzanine to the ground-floor pressroom. A faint stain just below the level of the fifth step from the bottom indicates the depth of the inundation that occurred when the water boiled through. 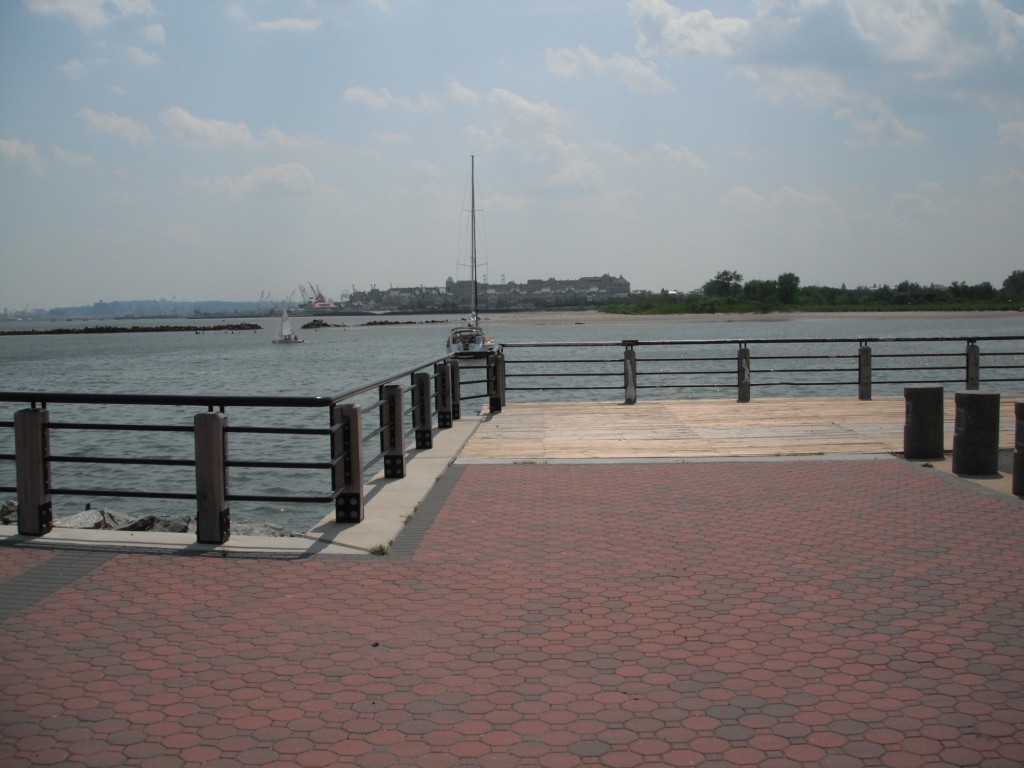 Located a few hundred yards below the plant, this shoreline scene looks peaceful now—but on the night of the storm, it turned into a floodgate of devastation.

Before it receded, the water had crested at a point where it submerged press motors and flooded nearly every other piece of equipment in the production area. Basile and McGee were able to recover and rebuild the press motors—about 50 of them—but what had happened to many of the other machines was much worse.

Now junk and in dire need of replacement were the plant’s digital presses, its CtP platemaker, its paper cutters, and one of its saddlestitching lines. The flood’s only unequivocal survivor was an envelope tabbing machine that had been placed on an elevated surface at some earlier point.

The hard work of reclaiming the plant—including drying, repainting, tearing out and rebuilding walls, and treating the entire 32,000-sq.-ft. building to prevent mold—went on for months, often in miserably cold and dark conditions. Basile and McGee reckon that the damage to plant and equipment came to about $2 million. They estimate that payments from FEMA flood insurance will cover a little less than one-third of the losses they sustained.

The partners’ quick reaction, both in attending to the cleanup and in making sure that production of customer work wouldn’t be interrupted, undoubtedly is what saved the business from extinction. The storm hit on a Monday, and by Thursday, McGee and Basile were brokering work and assuring clients that all would be well. As McGee says, “if you claim to be a service provider, you’ve got to provide service.”

Brokering went on for about three months until production could resume. The partners are under no illusions about the difficulties they will continue to face as they try to put Sandy and the losses it inflicted permanently behind them. But, the mere fact that the plant is back open and producing represents one of the most remarkable stories that the metro area printing industry has been able to tell in Sandy’s aftermath.

McGee relates it in his own words at his personal blog, where this remark sums up the extraordinary grace under pressure that he and Basile have shown ever since the day the skies darkened so ominously over Upper New York Bay:

“What to do? We never really asked the question. We’re going to rebuild and restore and make it better than it was.”