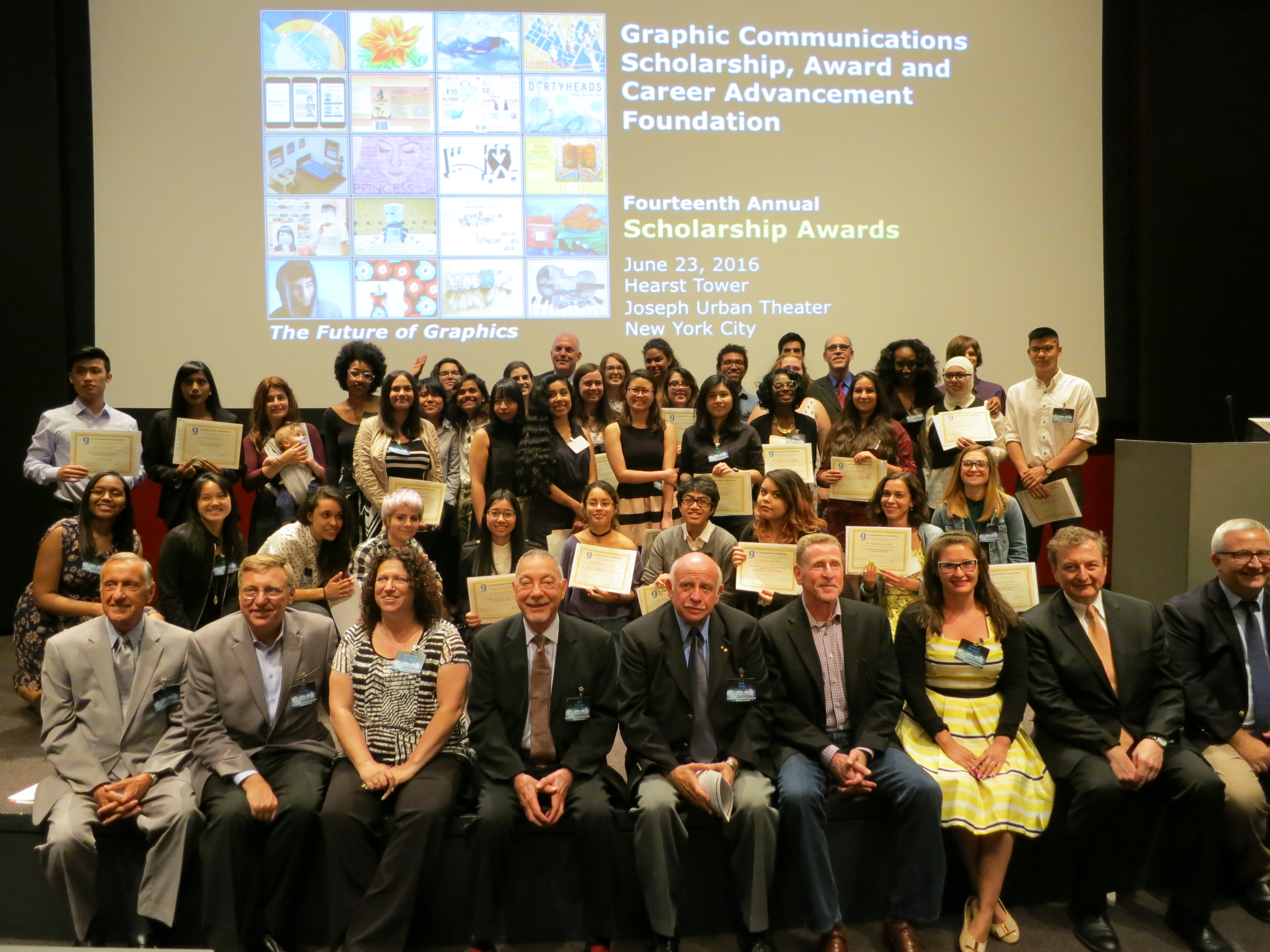 What does an educational fundraising organization do for an encore? The answer is easy: raise more money for education. Considerably more difficult is achieving a 50% year-over-year increase in scholarship funds distributed. But this year, that is precisely the philanthropic coup that the Graphic Communications Scholarship Foundation (GCSF) has managed to bring off.

The money—all $160,500 of it—is now in the deserving hands of 41 New York City metro area students pursuing undergraduate and graduate degrees at 16 schools offering programs in graphic design, production, and publishing. More than half of the record number are repeat recipients, and the group as a whole nearly overflowed the stage at the Hearst Tower Atrium during the 14th annual GCSF award ceremony on June 23.

The sum of the 2016 awards easily outstrips last year’s record-setting amount and is a far cry from the $5,000 worth of stipends that GCSF presented for the first time in 2002. Since then, a total of more than $686,000 has been disbursed to 149 recipients.

The grants come from an inventory of separately endowed scholarships that GCSF, a 501(c)(3) organization, coordinates and helps to raise money for. Students, who earn the awards by submitting portfolios, letters of recommendation, and supporting essays, may continue to apply for and receive them until they graduate.

Over the years, the GCSF scholarship program has become a focal point for educational giving by graphics industry trade groups in the metro area. The most munificent of givers in 2016 has been the Advertising Production Club of New York (APCNY), which raised about $100,000 of the total presented on June 23. Other stalwart organizational supporters include IDEAlliance, Printing Industries Alliance, and The Navigators.

Voluntarism in its purest form remains the cornerstone of everything that GCSF does. Its officers, who are uncompensated, work without professional staff or dedicated office space. This means that the program has virtually no overhead expenses—all of the money collected passes through to the students as stipends.

It has been done this way from the first time GCSF’s founding members sat down in a borrowed conference room to discuss how to revive a small number of print industry scholarship funds that were not being actively managed. Many more scholarship endowments have come under GCSF’s custodianship since then, but the group’s insistence on channeling 100% of their proceeds to students has not changed.

GCSF sustains the financial assistance it provides by drawing upon a dependable network of individual donors and corporate sponsors (see table below). The generosity of this network was evident at the group’s “Spring Fling” event on June 15, a fundraising-focused social gathering hosted by Ogilvy & Mather on the rooftop of its building overlooking the U.S.S. Intrepid on the lower Hudson River. 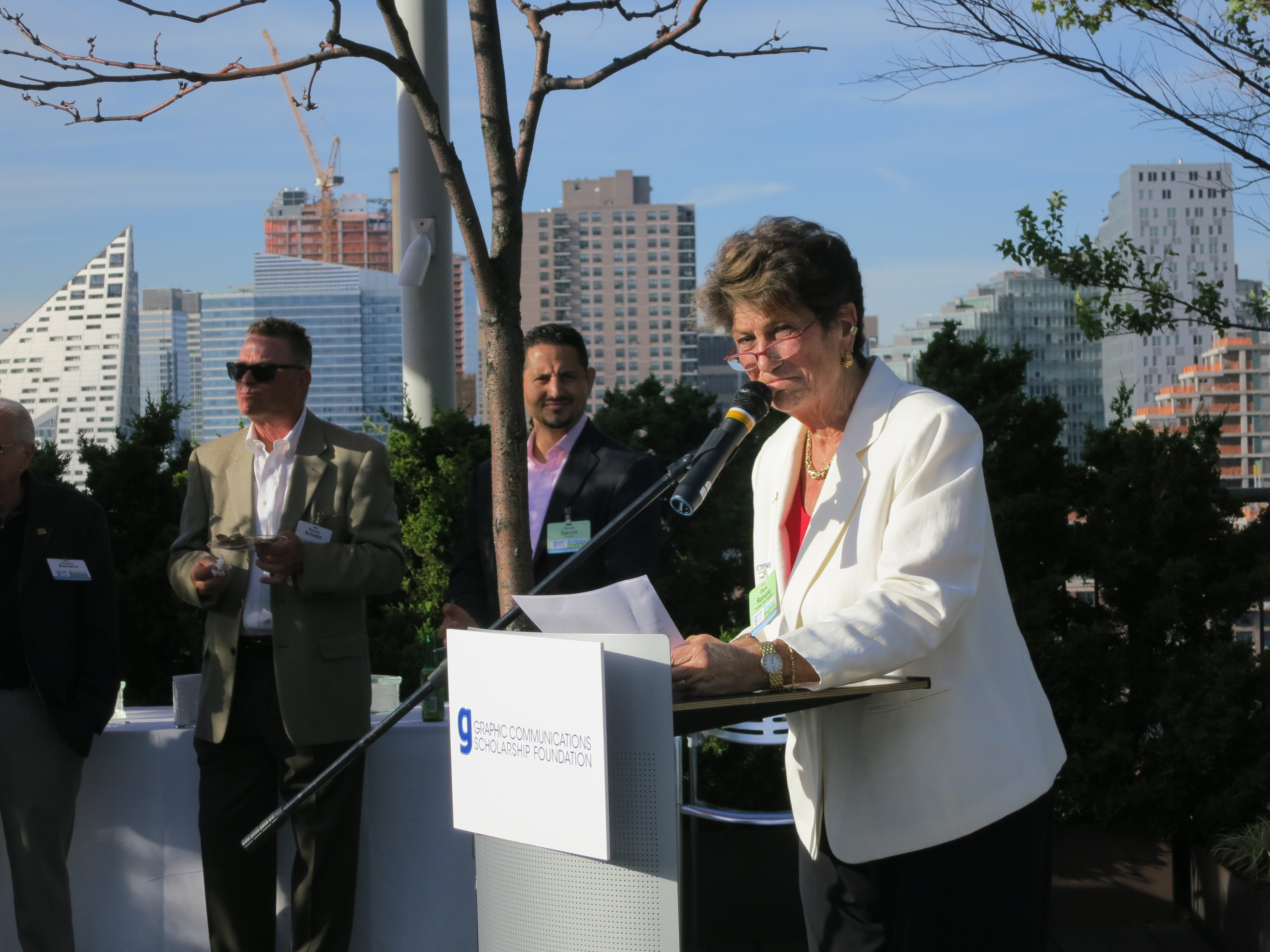 Nearly 200 printing, publishing, and media professionals attended, and 35 high-profile corporate supporters pitched in. The result: a net of $30,000 to help swell the bounty distributed at the awards ceremony on June 23.

Fundraising isn’t GCSF’s only outreach on behalf of graphics education. It also operates a mentoring program that pairs metro area students with seasoned members of the industry for 12 months of enhanced, hands-on learning experiences in real-world business settings. In this way, students gain both the practical knowledge and the personal confidence they will need for success in their chosen fields. GCSF also arranges internships and solicits contributions of training aids and educational materials for use in graphic studies programs. 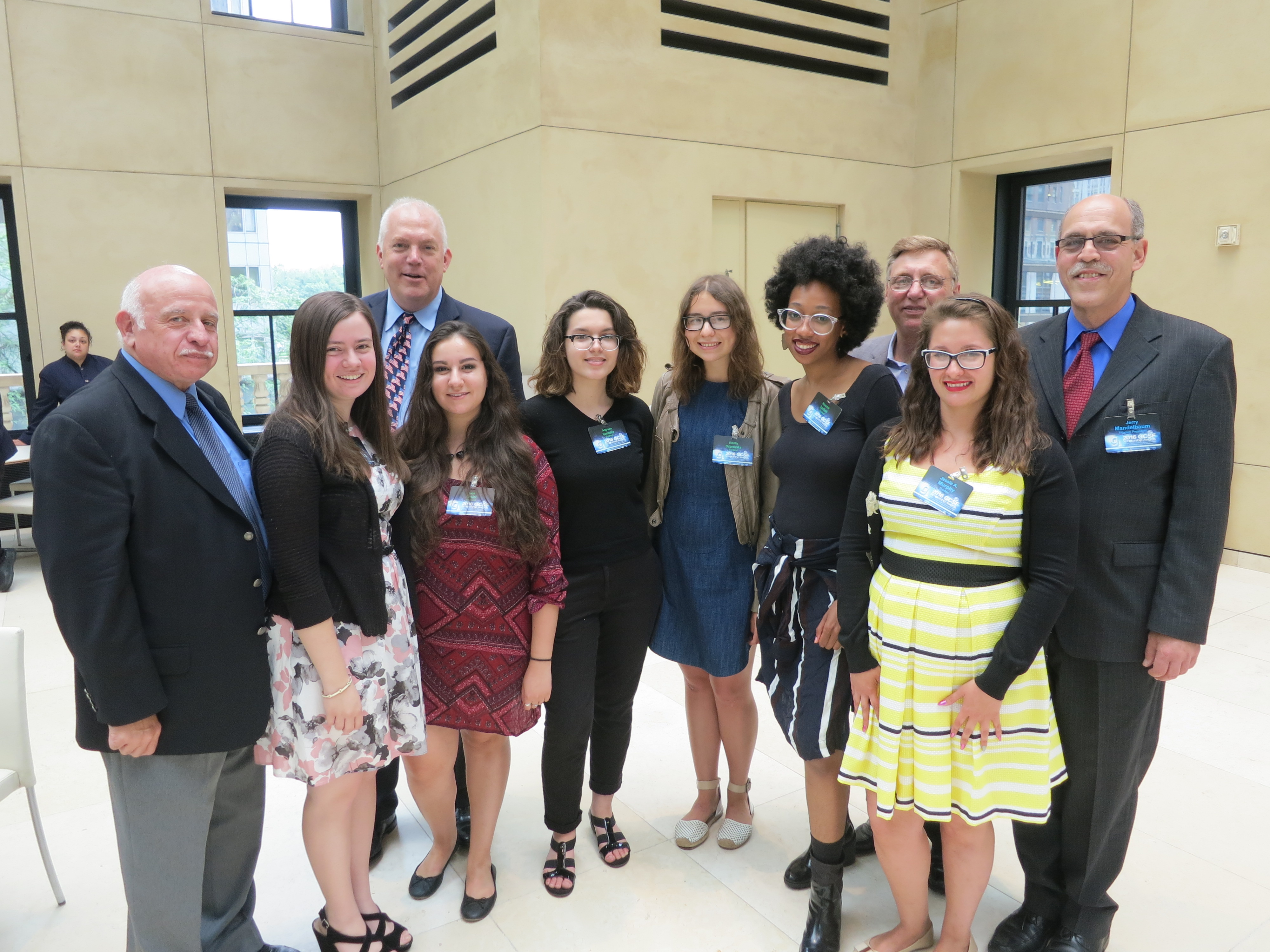 Everything culminates in the annual scholarship awards ceremony, held for the last nine years at the Hearst Tower Atrium. Student testimonials and the bestowal of a special educational honor highlight the value of GCSF’s work, the difference it makes in the lives of the students on whose behalf it is done, and the solidarity of the industry that stands behind it.

First-time recipient Sergio Georghiou, a freshman at SUNY Purchase and the creator of the winning portfolio in a citywide graphics competition, spoke with unrestrained emotion about his family’s faith in his talent through difficult times. “This award is for them,” he said.

Valerie Buonaiuto (Adelphi) talked about the personal growth she experienced by taking part in the mentoring program and completing a GCSF-arranged internship. Natalie Alcide, on her sixth GCSF scholarship grant as she nears graduation from New York City College of Technology, said simply, “I wouldn’t be the woman I am today” without the help she received from GCSF members who encouraged her along the way.

Since 2008, GCSF has saluted industry members with exceptional records of providing this kind of help as its “Champions of Education.” The 2016 honoree is James (Jimmy) Levin, an award-winning commercial photographer who went on to become a leading specialist in media recruitment and staffing. Today he operates Job Search Therapy, a consultancy for job and internship seekers. Levin sits on GCSF’s scholarship selection committee and is a board member and the education committee chairman of APCNY. 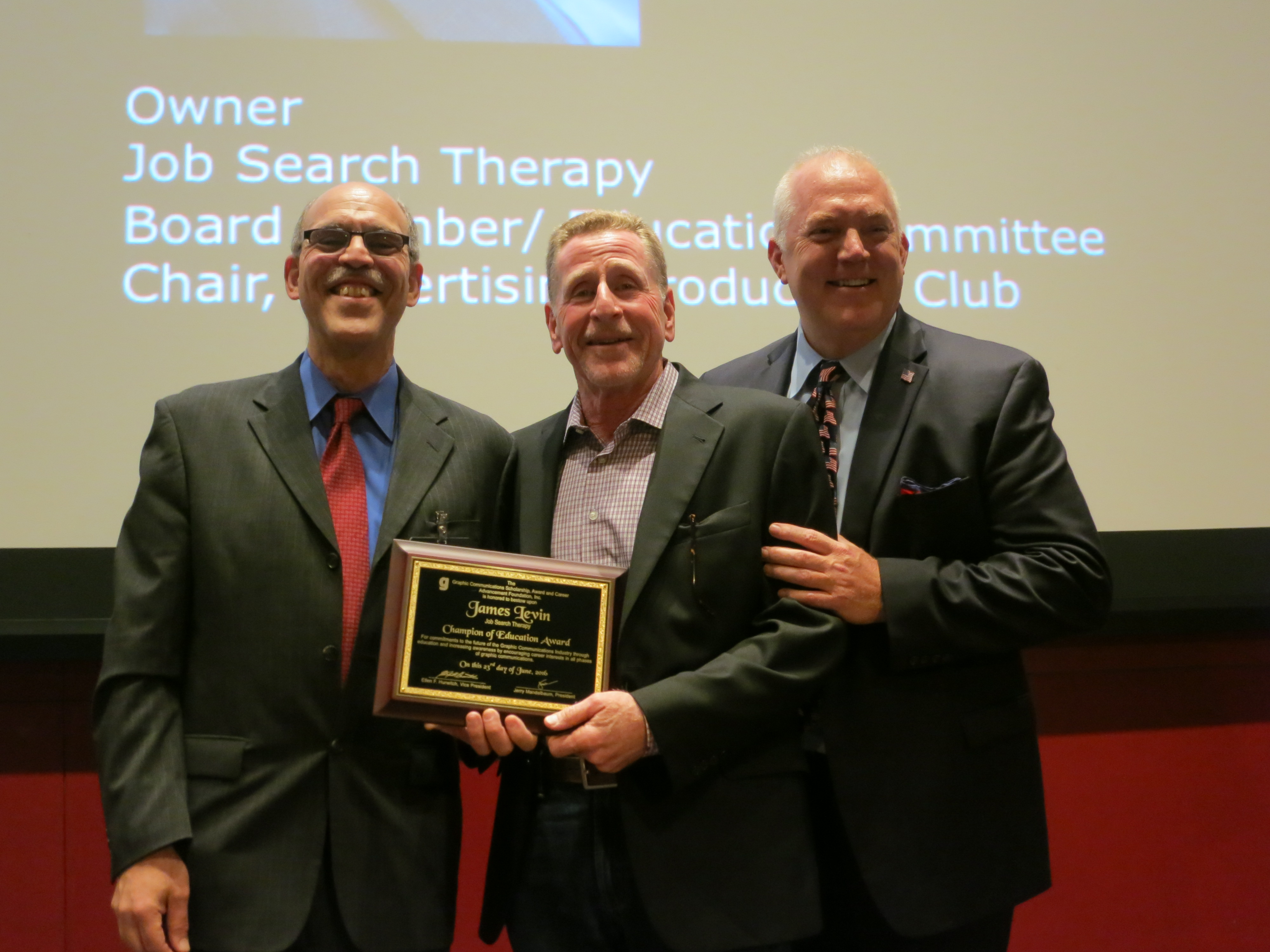 Accepting the Champion of Education award, he urged students to develop their potential “with passion and purpose”: always challenging themselves, but always focusing their energies on pursuits they enjoy and believe in.

Levin also reminded them that “attitude and effort” are two things in life that professionals can always control, even when other forces seem to be slipping from their grasp.

Many of the people who attended GCSF’s Spring Fling and scholarship award ceremony will also be on hand for another gala event that celebrates professionalism in graphic communications: the 2016 Franklin Luminaire Awards, to be co-hosted by Printing Industries Alliance and IDEAlliance on October 19 at The Lighthouse at Chelsea Piers. PIAlliance and IDEAlliance’s DEER Foundation donate most of the net proceeds from Franklin Luminaire to GCSF.

GCSF’s next gathering will be its fundraising “Holiday Bash” on December 8 at a location to be announced.