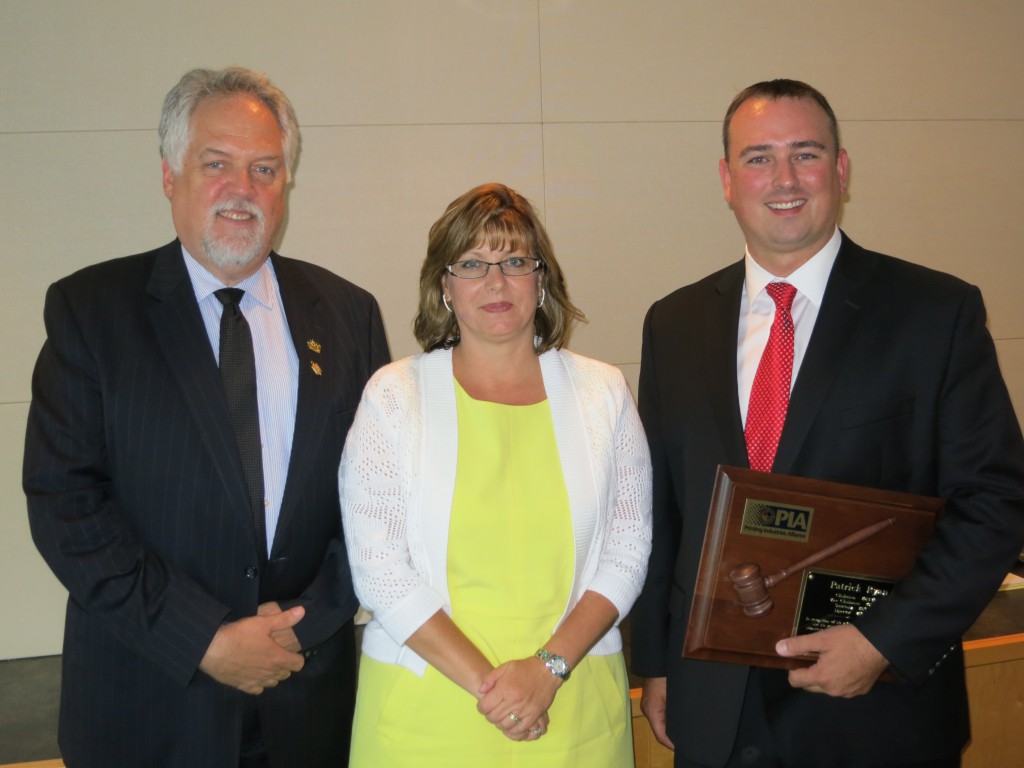 Dona Snyder-Reardon, incoming chair of the board of directors, Printing Industries Alliance, with Patrick Ryan (right), whom she succeeds in the position, and Timothy Freeman, the association’s president.

An old joke about sausage and law says that nobody should watch either one being made. The punch line doesn’t apply at meetings of well-run trade associations, where watching a slate of business being carried out can be as satisfying as observing a master chef prepare a gourmet meal.

I had the good fortune to be a guest at the June 18 board of directors meeting of Printing Industries Alliance (PIAlliance), the association for the graphic arts industry of New York State, northern New Jersey, and northwestern Pennsylvania. I’m a PIAlliance member myself, but, like most members of most trade associations, I don’t often get to see how the group I belong to operates at the executive management and policymaking levels.

The meeting took place at the Park Avenue headquarters of RR Donnelley in New York City. My notes from the session let me happily report that the association is in the good hands of people who are very serious about making PIAlliance grow in terms of both membership numbers and the range of services it provides to those who belong.

The group, a regional affiliate of Printing Industries of America (PIA), now has 335 companies on its roster. This is down somewhat from 12 months ago, given the contraction of the printing industry in the tristate region that PIAlliance serves. But, the group is readying a drive that will target more than 100 non-member companies deemed eligible to join the ranks. A special effort at recruitment is being made under the direction of Rich Barbaria in Long Island City, Queens, home to an important cluster of metro printing companies.

The mission of PIAlliance is to defend its members’ business interests and to help foster a business climate where their companies can prosper. Past, ongoing, and pending projects reviewed at the June 18 meeting indicated the breadth of the effort being made to achieve these objectives. Some highlights:

Details about these and other programs can be found at the association’s web site and in the pages of Signature, its member newsletter.

PIAlliance’s tagline words are Engage, Explore, Energize, and Excel. Judging from what I saw and heard on June 18, this member is confident that the group is Easily and Evidently Exceeding its goals in Each.

One-day courses to be offered next week in East Hanover, NJ, and Albany, NY, will show printers and mailers how to cost effectively produce and process direct mail to meet U.S. Postal Service standards.

Printers and mailers are invited to explore the link between mailpiece design and USPS regulations at the one-day Postal Boot Camps in East Hanover on May 5 and Albany on May 6. Co-sponsored by the New York Chapter of Epicomm and Printing Industries Alliance (PIA), both courses will be led by George Heinrich, the “Postal Professor.” He will give attendees a basic overall knowledge of the relationships among postal regulations, mailpiece design, and related postage costs, enabling them to better serve their print and mail customers.

A mailing industry veteran for more than 40 years, Heinrich is a featured speaker, teacher, and trainer who provides on-site mail- and fulfillment-related training and operational evaluations. Among the topics he will cover:

Epicomm and PIA recognize and support the integration of multifunctional services offered by today’s printers and mailers. The Postal Boot Camps will help companies that provide one or both services understand how direct mail can be produced and processed to meet USPS standards and regulations and achieve the most cost-effective results for their customers. Armed with this knowledge, they can offer more comprehensive and competitive services for today’s print and mailing services buyers.

The May programs will be the only Postal Boot Camps to be offered in the metropolitan area this year. The New Jersey session will be held at Paper Mart, 151 Ridgedale Avenue, East Hanover, N.J. The New York program will be held at Treviso, 257 Washington Avenue Extension, Albany  N.Y.

Postal Boot Camp registration is $150 for the first attendee and $125 for each additional attendee from the same firm.  For more information or to register, visit www.pialliance.org; or contact Jim Prendergast, (212) 217-6824, jwpdirect@gmail.com; or Kim Tuzzo, (716) 691-3211, ktuzzo@pialliance.org.

Since 1971, the federal government’s Occupational Safety and Health Administration (OSHA) has required many employers to document work-related injuries and illnesses. Specifically, companies employing more than 10 people or responsible for more than 10 employees—in other words, most printing businesses—must keep a yearly log of these incidents and post a summary in the workplace. OSHA inspections can include checks for compliance with the requirements.

To help keep it all from turning into a bureaucratic nightmare, the Printing Industries Alliance (PIA) offers a free video webinar on maintaining the log and posting the summary information. The program is presented by Jerry Banks, PIA’s manager of membership services, who cheerfully describes it as “pure torture, but it’s only about 30 minutes long.”

The webinar, available to members and non-members of PIA alike, reviews the various aspects of the OSHA standard and guides printers through the proper preparation of the log forms. It addresses recording criteria and offers insight into what OSHA inspectors will look for when examining injury and illness records for compliance. The official paperwork—the Form 300 log, the Form 300A summary, and the Form 301 incident report—can be downloaded along with instructions from the OSHA web site.

Help with OSHA compliance is one of a number of environmental, health, and safety services provided by PIA, a trade association representing printers in New York State, northern New Jersey and northwestern Pennsylvania. For example, members can take advantage of a comprehensive, no-cost safety training program that’s designed, says the association, to “help keep you out of trouble with OSHA, NYS DEC and other regulatory agencies.”

Printing Industries Alliance (PIA) has announced a “Lunch and Learn” webinar series on employment law. The five-part series, beginning on August 23 and continuing through the end of the year, will be presented by association general counsel Nicholas J. Fiorenza and Michael L. Dodd of Ferrara, Fiorenza, Larrison, Barrett & Reitz, PC (Syracuse, NY).  Topics include:

Thursday, November 15, 2012, noon to 1 p.m.: Workplace Harassment:  Claims That Strike When You Least Expect It

“We have all cut staff to the bone, often including our human resource function,” comments Timothy Freeman, president of PIA. “Yet, the need for effective human resource management and the exposure to significant liability for harassment, discrimination, etc., remains high.”

The cost to participate for PIA members is $65 per computer connection per session ($100 for non-members). Click here for a program flyer and registration form. Online registration is available at www.pialliance.org. For more information, call PIA at (800) 777-4742.

The Printing Industries Alliance office has heard from members across our region about visits from their local OSHA (Occupational Safety and Health Administration) offices. Much has been written lately about increased OSHA inspection rates and higher fines.

Overall, the rate of general industry inspections has remained fairly steady and on a probability basis, your chances of being inspected are relatively low. That being said, there are elements present in our industry that make printing firms more likely to be inspected. Fines resulting from citations are higher and more difficult to negotiate down. Most important, the time to get your OSHA compliance program organized is not when the inspector is in your lobby.

The elements in play within our industry are the opportunities for amputation/crushing injuries and the presence of paper dust and spray powder in our manufacturing areas. OSHA has what are termed National Emphasis Programs for amputations and combustible dust. This means that OSHA is going to look at companies and industries where these types of factors are present. When they visit, they will be looking at your entire program, but most critically at these issues.

With regard to fines, in late 2010, OSHA adapted changes to the way it discounted fines for such factors as company history, size, good faith, etc. In a nutshell, it has become much more difficult to obtain meaningful fine reductions, resulting in higher costs for companies running afoul of these regulations. Here at PIA, we have witnessed these higher fines in talking to members who have been inspected over the last several years.

The following is a list of the most often cited OSHA standards in our industry (SIC 2752, all 50 states) from October 2010 to September 2011, along with total current* penalties in each category: 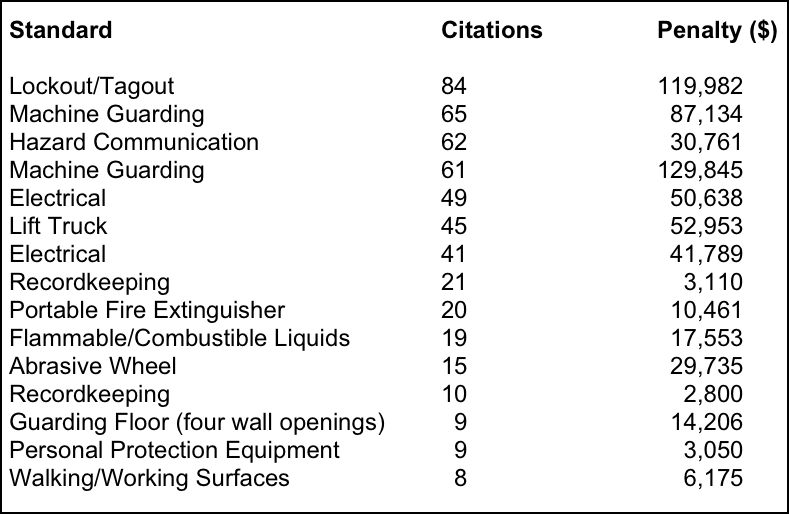 There are 30 other standards listed, with anywhere from one to eight citations issued. The full list is available from PIA upon request.

Compliance with these standards can be tricky and overwhelming if you need to scramble and get a number of programs in place in a short time period.

Printing Industries Alliance can help. Contact Tim Freeman at (800) 777-4742 for a free copy of our publication, “OSHA Primer.” This industry-specific publication will walk you through compliance requirements for all major standards impacting our industry.

As the old saying goes, “An ounce of prevention is worth a pound of cure!”  Take the necessary steps now and avoid potentially thousands of dollars in fines.